That’s All Well and Good 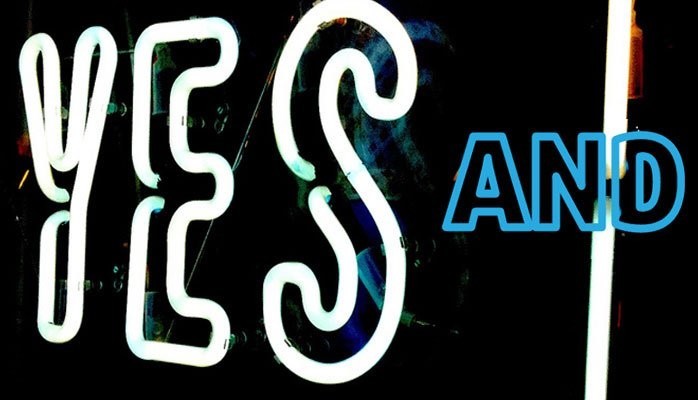 A great lesson from the world of comedy. One of the fundamental guidelines of improv comedy—practiced by groups from Chicago’s Second City to New York’s Upright Citizens Brigade—is known as the “Yes, And” rule. A strategy for performers to keep the scene going, “Yes, And” instructs improv actors to always accept what his or her partner does (“yes”), then add new information to the scene (“and”) in order to keep the narrative going.

I think a lot about the “Yes, And” rule in relation to the companies with which we work, especially now that I have moved to France. “Doing good by doing well” is a common expression, sometimes attributed to Benjamin Franklin, that’s used to describe practices that drive your business and make the world a better place. As in improv comedy, being additive is a good thing! In business, goodness can build upon itself to create something great.

It’s not the same as CSR (Corporate Social Responsibility). Too often CSR gets relegated to a function, something businesses have to do for regulatory reasons. Doing good by doing well is not an initiative or an “effort” that gets assigned to someone who has a million other things to do that are much more urgent.Â I would argue that there is nothing more important in today’s marketplace. Having a sustainable business model that more strongly links business success to the success of humanity is what will pay over the long term.

Companies that have famously embedded philanthropic good and sustainability into their business models include Toms Shoes and Warby Parker known for their “one for one” programs of giving away pairs of shoes and eyeglasses to a poor child for every pair sold; fast dining phenomenon Chipotle, which announced its mission to use naturally raised meat, organic produce, and dairy products without added hormones way back in 2001; and Google, which apart from giving away billions in philanthropic grants and free advertising each year, has been carbon neutral since 2007.

Another organization that is getting this right is in/PACT. Â I have accepted a seat on in/PACT’s International Advisory Board because I believe strongly in the company mission, which is to connect purpose to purchase. in/PACT is essentially a platform that allows people to self-direct their charitable giving associated with a purchase that is aligned to a brand’s purpose. Gone are the days when 2% of the purchase price of a product donated to the likes of a large charitable organization really makes a difference to anyone anywhere, let alone impact consumer behavior. People what to feel that their giving is meaningful to them and their world in real time in their community. in/PACT enables this and has a fantastic future as a result.

Two of the most awarded works in the Publicis Groupe network show how business drivers that make the world a better place can be baked into the very fabric of creative campaigns. Procter & Gamble’s “Like a Girl” is a cross-agency Publicis Groupe effort led by Leo Burnett that took home the PR Grand Prix at the Cannes Lions International Festival of Creativity. The campaign slogan, which aimed to change the meaning of the playground taunt—what it looks like to run, throw, or fight “like a girl”—became a rallying positive gender rallying cry that spoke across borders and galvanized these agencies into doing some of their best recent work.

Likewise, the Penny the Pirate campaign for eye care provider OPSM saw Saatchi & Saatchi Sydney answer in an innovative way the sobering statistic that forty percent of parents never take their children for vision tests. Working in partnership with OPSM and the Department of Optometry and Vision Sciences at the University of Melbourne, Saatchi & Saatchi asked “Why not create a vision screening tool just for kids?” then did just that in the form of a free book and interactive App that turns clinical eye tests into an illustrated children’s book.

While all these are recent examples, doing well by doing good is no new phenomenon. Many of the original captains of industry—including Josiah Wedgewood, Henry Heinz, and Milton S. Hershey—put improving the social good at the heart of their business strategy. These heroes of the industrial age provided not just training and living wages for their workers; they built schools and entire towns.

Is doing well by doing good the secret to inclusiveÂ capitalism? “Yes, And.”